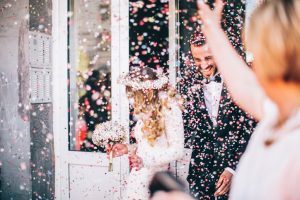 Your wedding day has come and gone, and now it’s time to settle into married life. There are many topics to discuss and decisions to make, and financial conversations should be at the top of your list.

Even if you had honest discussions prior to marriage, which we hope you did, now is the time to put it all into practice. And that can be the hard part. Successfully aligning your finances as a married couple is possible though, and two of our married bankers from Bryant Bank share their real life experiences to offer advice, tips, and encouragement.

Experiences and perspectives from Bryant bankers

Curtis Baggett, Bryant Bank Vice President of Commercial Lending, and his now-wife actually decided to pull credit reports with each other before becoming engaged. He says they also discussed finances on several occasions, including at a pre-marital class. “These early discussions forced us to think about daily spending, vehicle purchases, and housing arrangements and how each of those things would impact each other once we were married,” he says.

These conversations helped them know more about each other in terms of debt, budgeting, and their general approach to paying bills and discretionary spending. “Once we understood one another’s financial standing and personal goals, making decisions on how to move forward in merging finances was more clear,” he says.

To join accounts or not

When it comes to making decisions about having joint accounts, Curtis says a simple and transparent arrangement works best from his perspective. By “simple“, he means having just one or two checking accounts. The fewer accounts there are, the less likely common issues such as overspending and late payments will occur. A transparent arrangement means both parties can see all accounts, which will help avoid confusion and provide accountability about where your money is going.

Natalie Spott, Bryant Bank AVP Branch Manager, took the approach that all accounts would be joint once she was married. “As a family, we decided it was beneficial for us to use the same account and for one of us to pay the bills so that somebody always knew what was going on,” she says. Natalie’s husband uses his credit card while she uses the checking account. Once a month, she pays off his credit card. She says this works for them and their personality types. It’s often important to consider how each of you prefers to handle daily finances and try to make that work in your overall plan.

For Natalie and her husband, debt came up as a topic they needed to discuss. As a mom with two kids, Natalie was never living outside her means or overspending, but daily financial demands had caused her to accumulate a small amount of debt.

“I knew he felt strongly about not having debt, and it was important to me that he knew it wasn’t a characteristic or lifestyle of mine. It was strictly circumstantial,” Natalie says. Both Natalie and her husband were passionate about and dedicated to becoming debt-free, so they had serious conversations and came up with a plan.

Their plan started by taking the debt on together once they were married. It was no longer “her debt,” but it became “their debt” to climb out of by creating a budget and following through with it no matter what. Because of their dedication, they were able to pay off the debt in exactly the way they said they would.

Natalie says that just having a savings account or having a budget is not the same thing as actually using and utilizing both. They were descriptive and detailed about how to save and budget. “What money are we going to save,” and “Why are we saving?” were two questions they asked themselves to make sure their perspectives were the same.

“Instead of just having generalized goals, we dove into specific details about what money was allotted for each goal or line item. We made a commitment to not veer from our plan even when things got a little tight,” she says.

When you know exactly how you will save and why you are saving, and when you know what each line item on your budget means, Natalie says that’s when you will see the biggest difference in being successful with saving and budgeting.

Biggest pieces of advice for finances after marriage

The most important aspect of having a financial plan and following through is that both partners should be involved.  It is too much responsibility for it to fall on one person, even for a banker who knows finances inside and out. “Make sure both people are always involved and in conversation about what’s going on so one person doesn’t feel all the responsibility of the finances,” she says.

If Curtis could narrow down his overall financial advice for those who are recently married, he would share three tips:

It’s also not uncommon for newly married couples to need some financial advice, and this is where our Bryant Bank bankers can step in. Discussing money and banking is not a natural discussion for most people, Curtis says.

“However, discussing money and banking is more natural for Bryant Bankers. Please lean on our experience to help you customize the best set up of checking accounts, savings accounts, and cards to help you succeed in your relationship when it comes to banking,” he says.

Our bankers will always be happy to answer your questions about what accounts and loans are available, and we will take the time to explain advantages and disadvantages of all financial products we offer. For those who are engaged or recently married, start your research now online at Bryant Bank, then contact us when it’s time to start having these important conversations.