The Trussville Area Chamber of Commerce awarded Alan Taylor, Trussville President, and the Trussville Bryant Bank the presitigious Gatekeeper award at its 56th Annual Chamber Banquet. The event took place on January 28th at the Trussville Civic Center. The banquet not only served as a fundraising event, but it also recognizes outstanding volunteers and customer service and officially inducts the chamber’s new board members. Nominations for the Gatekeeper award are accepted from the community-at-large, and a committee comprised of the three previous years’ recipients in each category make the final selection. 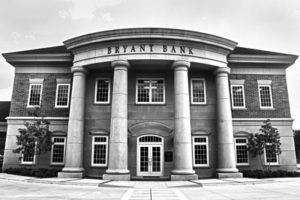 “The leadership and team at Bryant Bank have set the standard for corporate support. Through their support, many events, city functions and non-profit organizations have been able to succeed. Not only do they show their community support through financial gifts, the staff actively participates in events in our city. They volunteer at Dog Daze and at the school foundation’s gala. They serve hot chocolate at the Christmas parade. They are leaders. They are vision casters.

A good leader sets the pace for any company or organization. Alan Taylor is just such a leader. There are few organizations in the city of Trussville that he doesn’t support, and that’s probably due to the limited number of hours in a day. He has served on the YMCA board of directors, has served as president of the chamber of commerce, is currently serving as president of the Trussville City Schools Foundation Board of Directors, and is President-elect of the Trussville Rotary Club. He serves or has served on several city boards and committees, including his current service as Chair of the Grow Trussville Economic Development Committee. He and his wife Yo teach a newly married Sunday School class at First Baptist Church. He is the voice of the Huskies and has for many years been the announcer at high school athletic events, and he even came out to at least one Dizzy Dean baseball all-star championship game and announced the game. Alan Taylor and the folks at Bryant Bank are definitely deserving of this year’s group Gatekeeper Award.”