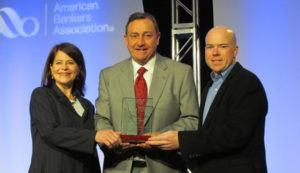 PALM DESERT, Calif. – On February 21st, the American Bankers Association awarded Bryant Bank the prestigious Revitalizing Your Community Award for their outstanding community service efforts following the April 27th tornado outbreak. The award honors the institution that has taken an innovative, creative and effective approach to make a difference in the community. The award was presented to Bryant Bank at the American Bankers Association National Conference for Community Bankers in Palm Desert, California.

The ABA selection committee chose Bryant Bank for the award from a field of nearly 200 nominations based on the innovation, creativity, and effectiveness of the bank’s approach to making a difference in its community.

Following the tragic events that occurred on April 27th, Bryant Bankers set out to rebuild and restore their affected communities.

“There was no doubt in my mind that our bankers would rise to the occasion to help our community in its tragic time of need. I’m so very proud of all of them. It’s no different than what they do every day, volunteering in so many ways in our communities across the state. Our bankers truly have the heart, spirit, and dedication that defines us as a community bank,” said Paul W. Bryant Jr, Bryant Bank Chairman.

In the days immediately following the storms, Bryant Bankers went out into the community to help in every possible way. Water, food, and supplies were distributed on foot due to impassable roads. Some bankers took their chainsaws to clear trees, while others hauled debris and placed tarps on roofs. The immediate response was not an orchestrated event; rather it was a reaction to an innate call to do the right thing for the communities the Bank serves. 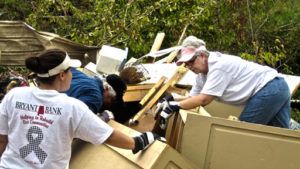 Bryant Bankers lend a hand in cleaning up after the April 27, 2011 tornado

The teams worked in partnership with organizations such as Samaritans Purse, FEMA, and the Compassion Coalition. In excess of 2,000 Bryant Banker volunteer hours were expended during a two month period to clean up and rebuild. All Bank Offices served as collection points for donated items.

Additionally, each May, Bryant Bank has a Saturday picnic to celebrate, honor, and show appreciation for its staff members and their families. Board members and their families join in this celebration too. Even though the date had been established and the event planned prior to April 27, 2011, the Bryant Bankers, in unison, decided that rather than spending the day together at the picnic, they would volunteer in their communities along with their families and coworkers.

Support continues to this day in many ways, including for Alberta Elementary, one of the Bank’s adopted schools, which was left in rubble after one of the many tornados of the day ripped the building apart. Bryant Bankers tutor volunteers and provide financial literacy education and recognition programs for the impoverished student body on a continuing basis.

Bryant Bank is a community bank employing 155 people with 13 locations across the state of Alabama. It was founded in 2005 in Tuscaloosa Alabama. The offices of the bank are located in the Tuscaloosa, Birmingham, Huntsville, and Baldwin county markets.